REUTERS : Myanmar takes long-awaited ASEAN chair, but can it cope?

The annual East Asia Summit ended on Thursday without significant progress on the dispute, with a joint ASEAN-China statement saying only that the two sides had agreed to “maintain the momentum of the regular official consultations”.
CAMBODIA DAILY :

“The violation of human rights committed by the police and military police should be condoned? He is in charge, he must be accountable. The investigation has to be independent, transparent,” Sochua said.

“I am extremely shocked by this lack of responsibility to the whole nation. What happened on the bridge was a tragedy. What does Sar Kheng have to say to the children of the man who was killed?”

Global Post : In Cambodia, Monks get political after unpopular election

Another version of  Hoam Raung : shorter

En ce qui concerne le Cambodge, je cite : The economic outlook, however, faces some risks. It is unclear how big an impact the political uncertainty
postelections is having on FDI and growth

Conclusion de l’Article : Mr. Jochnick said that the scale of purchases was not at issue. Any sugar from Cambodia, because politically connected companies were given large tracts of land by the government, is, he said, “symptomatic of much broader land problems in the sugar industry.”

Kong is not alone. Across Cambodia more than 700,000 people have lost their homes and land due to economic land concessions, many to plantations that supply sugar to some of the world’s largest beverage brands. Sugar cane covers more than 100,000 hectares of Cambodia.

Rights groups say sugar is one of the biggest drivers of land evictions. With the global demand for sugar expected to increase by 25 percent by 2020, advocates warn that more rural Cambodians will be pushed off their land to make room for companies supplying PepsiCo and Coca-Cola, two of the world’s largest purchasers of sugar, according to a new Oxfam report released on 2 October.

“We found evidence that sugar production has a large influence on land rights, and there is more and more evidence of the effects sugar has on land grabs,” said Gertjan van Bruchern, Oxfam’s associate country director in Cambodia.

Huge profits are being made though a scheme by the European Union (EU) called Everything But Arms (EBA), which allows the world’s poorest countries to ship products to the EU duty-free.

Thus, the future for Cambodian politics looks grim and highly uncertain. There is a serious lack of trust and confidence between the two political parties, and it will be difficult for both to return to negotiations and find a political breakthrough until there is a serious compromise from both sides. If a sustainable power-sharing arrangement cannot be found, the country could fall into a short-term political crisis. The implications of this would be a serious setback in the country’s economic development and poverty-reduction efforts … 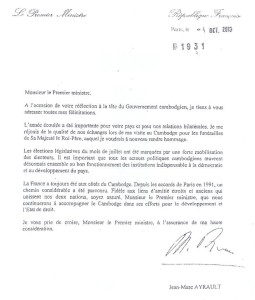 What does the future hold?

According to Eurasia Group President Ian Bremmer, the average hourly wage for garment workers in
Bangladesh is 24 US cents, 45 cents in Cambodia, 52 cents in Pakistan, 53 cents in Vietnam and US$1.26 in China.

“Skepticism is appropriate. Hun Sen has made ritual and unfulfilled promises over the years about land,” Brad Adams, Asia director at U.S.-based Human Rights Watch. “This announcement is no different and will have no impact on the crisis.”

Already, officials have transferred control of 2.6 million hectares of land to private business from mostly subsistence farmers, according to rights groups, affecting 700,000 people and 73% of the country’s arable land in the past decade.

Although Cambodia’s economy has grown at an average annual rate of more than 8% over the past decade, about 30% of its population still lives below the national poverty line, spending below 61 cents a day, while foreign aid provides roughly half of the annual budget of about $3 billion.

CAMBODIA: democrats must build new leaders and focus on nation-building

David Chandler, who is a historian and veteran observer of Cambodian affairs, says an attack against the journalists was probably orchestrated by the government

Killing & Attacks on Demonstrators; Violations of rights to freedoms of assembly and expression

What you need to be digital politicians in Cambodia